A bubbly tale from Australia! 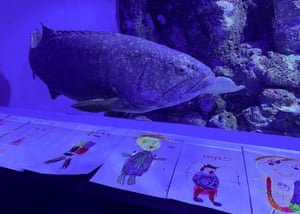 A giant grouper left feeling glum after coronavirus restrictions forced the closure of his aquarium has found an unlikely friendship with a group of schoolchildren.

In pre-pandemic times, seas of people would walk through the Cairns Aquarium doors each day to peer into the tanks.

But since being forced to close amid the pandemic, 'people-watchers' like Chang see only empty halls when they look for visitors through the acrylic.

The Queensland grouper was particularly hard hit. He began retreating to dark corners of his tank and even stopped eating for a few weeks.

Students from Torbanlea State School, 1,500km away on the Fraser Coast, empathized with Chang's plight, and made it their mission to cheer him up.

"Out of nowhere we received this package in the mail, and it was addressed to Chang the Lonely Grouper," aquarium boss Daniel Leipnik told AAP.

Inside were scores of self-portraits drawn by the year one class, and a letter addressed to Chang.

"When we couldn't come to school, some of us were feeling gloomy too," the letter read.

"Things will get back to normal, everything will be alright and you will be joyful again soon, like us."

The aquarium was under strict instructions to attach the pictures to the other side of the acrylic.

"That way, when you and your friends swim by, you will see people outside and you will feel happy again," the letter added.

"I thought, 'oh maybe they might put the letter up in the staff room or something'. I never imagined in my wildest dreams that they would actually do it," teacher Di McRae told AAP.

But the aquarium did as they were told, and "it did the trick".

"He was in a cave the whole day, but then when we put the pictures up against the acrylic, he actually came out and was watching it," Mr. Leipnik said.

The aquarium has fielded calls from people all over the world, checking in on Chang and his tank mates.

"People can relate to what an individual may feel like in an isolation type setting," he said.

"I think people see themselves in this giant fish."