Kitchen Remodel on a Shoestring Budget 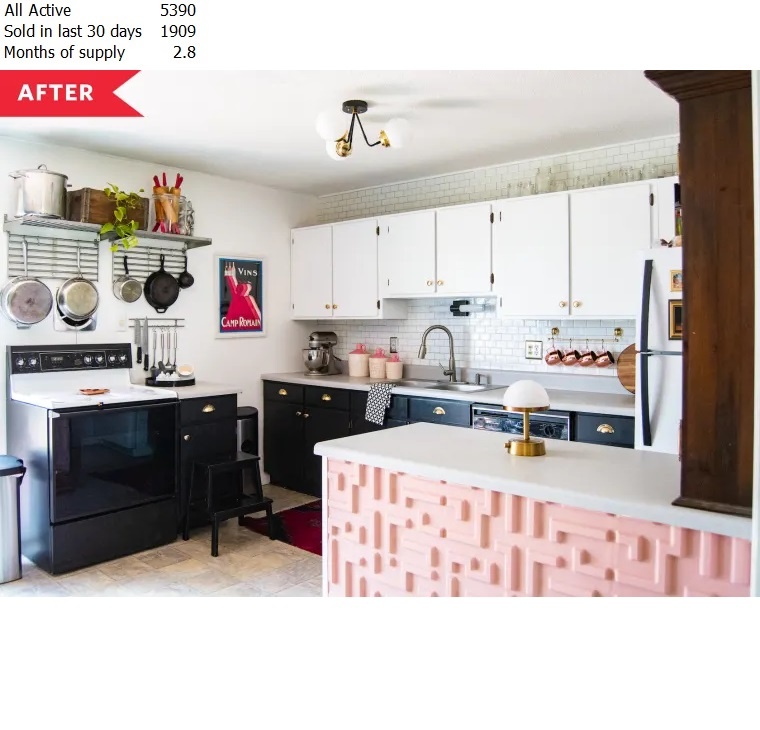 The saying goes, you get what you get and you don’t get upset—but we strongly disagree with this when it comes to styling your home. You should feel good inside your residence, not disappointed. Sometimes though, you have to work with what you’ve got to get it to a place where you adore it. One room that often gets overlooked is the kitchen, which might sound like a difficult space to make over—but in reality, a quick cabinet refresh or a coat of paint on your appliances can be wildly transformative. It also doesn’t have to be as complicated (or as expensive) as you might think, as proven by the astonishing facelift Katherine Thewlis of Hausmatter gave this outdated mid-century modern kitchen for just $1,000.

“My goal was never to take the mid-century out of this space. From the flat panel cabinets to the laminate countertops, this kitchen is midcentury AF,” Katherine says. “But mid-century modern isn’t the only style I enjoy. I didn’t want to feel forced in one direction style-wise. I never design any other spaces that way, why here? My intent was to inject this mid-century modern kitchen with some other flavors. It didn’t need to make sense; it just needed to work.”

Katherine decided to blend Shaker and English traditional styles in with the mid-century modern accents, and because of their differences, she appreciated how well they complemented one another. She removed the hardware and replaced it with brass knobs from Spearhead Collection, which she noted would patina over time. When it came to paint color, she knew black and white would be fail-proof options to help tie everything together and stuck with Benjamin Moore’s Chantilly Lace for the white uppers and Benjamin Moore’s Onyx for the black base cabinets.

“I know some purists won’t understand painting over real wood cabinetry, but this was one of the original aspects that was limiting me the most style-wise,” she says. And there was another good reason for it, Katherine says: “Painting the base cabinets black also helps disguise another element in the room that’s out of my control: the appliances.”

The appliances in question? The oven and dishwasher, which were both unsightly features in Katherine’s eyes, “I wanna let you in on a little secret. I’ve thought about murdering this oven so my landlord would be forced to replace it. Is that bad?” she says jokingly. Unfortunately, since the place is a rental, there wasn’t too much she could do about it. “My solution was to anchor it with this shelving system so that it felt like it belonged to the rest of the kitchen,” Katherine says.

Aside from shelves, which came from IKEA, Katherine also painted the entire oven black to modernize it and make it match with the dishwasher. Then, to really round out the space, she painted the handles of the refrigerator and freezer black so it too could feel intentional. To really make it stand out, she also removed the doors of cabinets above the freezer and painted the inside black so she could display a chic collection of cookbooks.

Another two impressive features are the peninsula and backsplash. Kathrine covered the first in 3D tile from Art3d and painted over it with a rosy hue (Behr’s Retro Pink). The result was a fun and fresh focal point that instantly draws your eye in because of how well it contrasts with the black and white. The backsplash she had “installed” is actually a faux peel-and-stick from Tic Tac Tiles.

“I also applied it above the uppers to elongate the feeling of this 8-foot wall,” Katherine says. “It sort of takes on a French bistro feel which I love.” For finishing details, she added an Art Deco lamp from Modern Lantern to the peninsula and a light fixture from Illuminate Vintage to the ceiling. She also painted a coat rack from Poly and Bark and laid a cranberry-colored rug from Etsy in front of the sink, rounding out the room.

If you’re stuck in a 1970s wood-laden cooking space when you love modern farmhouse or are on a super tight budget, Katherine’s reno taught her that achieving some level of a dream kitchen is completely possible, “During this process, I have become absolutely convinced you can have a kitchen that suits you, no matter the existing style, budget, or circumstances,” she says. “Here is my trick to bridging to opposing styles: There has to be a predominate element in the room that is neutral and timeless, style-wise. In this room, that is the subway tile on the wall. Is it overused in kitchens across the world? Yes, but there is a good reason why: it goes with nearly everything and does not have an overt style classification. Think of it as the chameleon of tiles.”