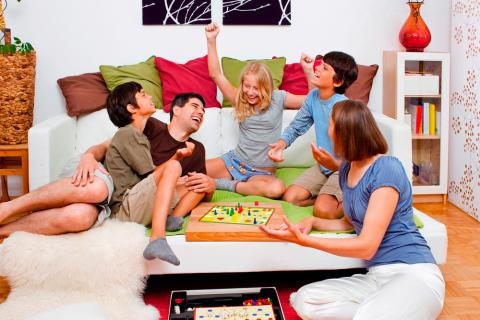 Games are a fun way to connect with family. Playing games together creates memories that each family member can cherish forever. The following 10 family-friendly games are perfect for game nights or for any time you want to come together and share each other’s company.

1.Pictionary
This classic game requires a great deal of drawing, but you don’t need to be an artist. It’s more fun if participants can’t draw. Laughter is sure to ensue when each family member takes a turn sketching an object while others try to guess what it is.

2. Charades
Charades is another classic that is always fun. Split your family into two teams. One person from each team takes a turn acting out a book, movie or TV show. The actor’s team members must guess what the title is. You can play Charades by timing each team as they perform and guess individually, or by having a timed contest with both teams taking the challenge at the same time.

3. Telephone
Many people played Telephone as a kid. To play, have one person whisper a sentence into the ear of someone sitting nearby. In turn, that person will whisper what they heard into the ear of another person. Often, it’s hard to hear anything concrete. However, that doesn’t mean the game stops! Players must simply make up what they can’t hear, and that’s when the real fun begins.

4. Egyptian War
Egyptian War has long been a popular card game. This game is similar to the classic War, in which taking possession of the deck is the goal. With Egyptian War, however, there is a lot of card slapping going on, and players must pay attention and strategize.

5. Spades
If you have exactly four players, Spades is a great family card game. The object is to take the least number of books (or tricks) that were bid upon before game play began. Spades is a descendant of Bridge, Hearts and similar card games.

6. Spoons
Gather your family, sit in a circle, and in the center one less spoon as there are family members. The game play goes a little like musical chairs. Each player starts out holding four cards. The group passes a deck of cards around the circle, and each player looks for cards that will complete a matching set of four.

When you do, discreetly take a spoon from the center. When other players notice a spoon is missing, they should grab one as well or be left without, the person left without a spoon is eliminated

7. Uno
Uno is a family favorite that proves good games don’t need to be hard. A deck of A deck of Uno cards is available at many big box stores and toy stores, as well as online.

9. Dominos
If you want a game that you can play multiple ways, choose Dominos. This game is like a deck of cards in that it provides a myriad of ways to have fun, be challenged and spend time together. Popular variations on the game Vinclude Chicken Foot and Mexican Train.

10. Would You Rather
Build camaraderie and learn more about your family members by playing Would You Rather. The game begins with one person asking a question like “Would you rather eat only ice cream or pizza for a week?” Designate one side of the room in for ice cream and the other for pizza. Players move to the area representing their choice. It’s fun to see what everyone disagrees on or has in common.

If you don’t already have a regularly scheduled family game night, consider adopting any of these fun traditions!